More about »Emperor of Shadows«

You are here: English pageEmperor of Shadows

For centuries the human empire has grown, and the troops of its powerful emperors have brought all the neighbouring lands to heel. But resistance is stirring: there is rebellion in the provinces, which are trying to throw off human rule. When the Henchmen of Darkness mercilessly burn down human settlements, the young Ariadne escapes by the skin of her teeth, aided by the mysterious wanderer Dariush. But their persecutors cannot be shaken off, and Dariush gradually realises that Ariadne was the real object of the attack. Meanwhile Valeria, commander-in-chief of the imperial army, travels to the capital. At the new, young emperors bidding, Valeria is dispatched to the distant, renegade province of Heliopolis  but by doing so the humans are simply playing into the hands of their true enemies ...

Map of the World 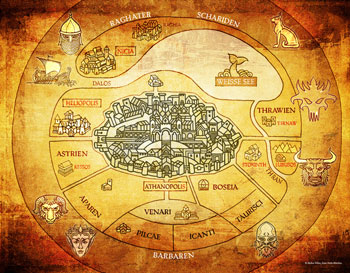 I am an avid reader of fantasy. And as an author, I simply love all the possibilities of the genre; it is fantastic in the best sense of the word!